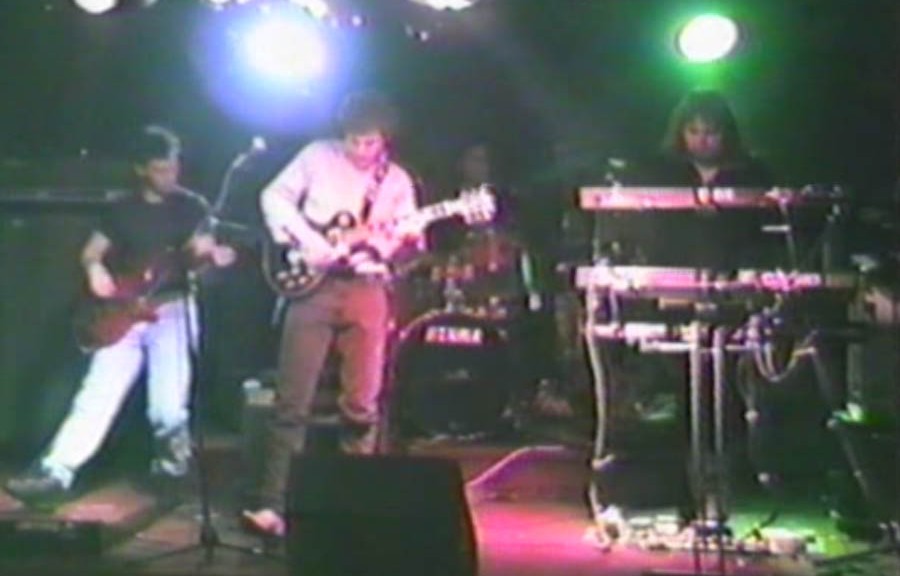 Go to the music!
thecreaturesofhabit1.bandcamp.com
All of our albums are here!

The Creatures of Habit have been creating original progressive music since 1988. A previous incarnation (Accolade) existed in 1979-1983.

The Creatures of Habit were formed years after a predecessor (Accolade) was disbanded, in 1988. Former Accolade members Michael Pendola (drums) and Tom Pajkowski (guitar) were shuffling with players for a new project. Uku Meri (keyboards) entered that project, and were later rejoined with another previous Accolade bandmate, Duane LeVasseur (guitar).

This was the Accolade lineup of early 1983. That lineup produced the Studio Ten multi-tracked album, available on Bandcamp.

Tom had to leave the project (then named Apple Pi), and the band was renamed shortly thereafter to The Creatures of Habit.
(The CoH logo was designed by Uku Meri at this time.)

We gravitated into doing creative music together again – as Creatures of Habit would tend to do.  We raise a symbolic toast in name to the Mothers of Invention, as well as fusing many types of music in the progressive rock tradition. The real inspiration was from a Gary Larson “The Far Side” cartoon.

As with Accolade, the band membership became a revolving door. Duane also left (relocation), and Uku and Michael were trying out different musicians while writing material as a “duo for four” (Up in the Air).

After many runs and auditions, the lineup was stabilized with the additions of Mark Corrigan (guitar) and (the late) Kevin Brown (bass guitars, bass pedals).
A new album was getting recorded in Uku’s MeriMusic Studio.

Force of Habit was our pinnacle for highly structured compositions.

If you are only going to listen to one, start with this one! Available for listen and purchase at Bandcamp.

During these sessions, Mark was diagnosed with Multiple Sclerosis – which prevented him from continuing at the time. Guitarist Joe Khejl, who had played with CoH in the transition era earlier, rejoined the band. Some additional tracks were recorded, including alternate new versions with Joe. Force of Habit features tracks from both guitarists (Mark and Joe), although they did not play together – at this point in time.

Mark was able to recover/control from MS and was reinstated into the band.

The Creatures of Habit performed several gigs in Manhattan and Long Island (and had others lined up).

However, the internal boiling point blew over and the plug was pulled on the project.

Several years pass. Mark had a plan to get the band back together. He was getting married, so with a wedding and reception, he successfully eased the bandmates together in the same room.

Arrangements were made for a reunion jam.

The jam was good, very good. So good, in fact, that the band is back together and steadily playing and recording.

The Rules Have Changed:

2006.
Much has changed since 1993.
We are no longer aspiring musicians looking for “The Deal”. We are responsible adults with less time for CoHmitment.

Until now, CoH had rigorous composing – practicing – recording sessions. We had to change our rules.

And we no longer had a personal (MeriMusic) band studio of our own.

A new direction for recording in these new times:

The band instituted a different recording method upon its resurrection.

Since the band has a core chemistry of over 20, 30, 40 years together, we can improvise on a higher psychic level.

CoH is improvising new original progressive music “on the fly” and recording it.
All new, fresh, no cover songs, always different, mostly innovative, and with our guest musicians – a melding of all types of styles, textures, rhythms, and personalities

On-the-spot (“street prog“) progressive music performances. It’s always unique, with many different musicians joining in the fun.  It’s about chemistry and its results.

From 2006 to 2013, The Creatures of Habit had a steady stream of jam-cording sessions.

We have our core members, and many recurring Creatures who participate when they can. We also get occasional guests playing with us. It’s a fluid and flexible situation.

Several others who weaved in and out over time. Plus numerous special guests over the years.

The sessions from 2006 to 2013 have been recorded. This is the “Live LICS” series.
The L.I.C.S. acronym is Long Island City Studio, although it would be more accurate as L.I.Q.S. (Q is for Queens, NYC – the home base for The Creatures of Habit).

The band is often augmented. It is always original improvisational music.
“You can’t make this stuff up, by we do!”

In 2013, two of the three core members moved to distant states, The new era has begun … namely the annual Reunion jam-cordings.

2019 and 2020 actually had two jam-cording sessions!
Otherwise, we still create music as if we never stopped playing together.
Because … we are The Creatures of Habit.

Accolade
Up in the Air

Listen to our MUSIC